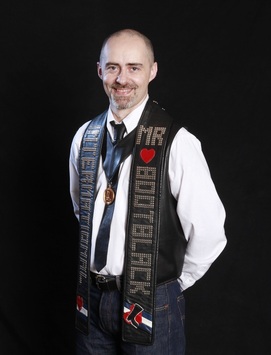 _
After Nick left the US Military in 2004, he spent his formative
leather years in Texas, learning about being a boy, and developing his
bootblacking style. He spent three years on the Board of EROS, a long
time pansexual group in Houston, and two years as a member of
NLA-Houston. He has done boots all over the country at different
events and bars, and helped to raise over $5,000 for charity.

Nick describes himself as a bi-poly-pagan-kinky-gamer-geek - or slut
for short, enjoys switching for impact and rough body play, and he
loves to bite. He is also turned on by bears, armpits, gloves and
cigars.

He currently lives in Portland, Oregon with his lovely wife of
thirteen years, and has a boyfriend in Edinburgh who he sees when he
can. He is one of the founding members of the PDX bootblacks and was the first ever Oregon State Bootblack 2011. 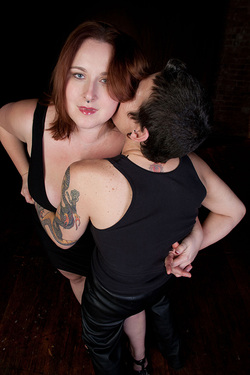 Annamarie is an inquisitive sadist with a knowledge fetish, for whom BDSM provides a never-ending source of deep joy. You can usually find her sticking sharp things, fists and sounds into people, or perhaps throwing her whips and giggling.  Kinky for as long as she can remember, she has been active in the Portland area community for six years and is a member of the PLA, NCSF, Woodhull Sexual Freedom Alliance, and the Vancouver Munch, where she hosts the monthly chat night. She has been vending kinky rubber products with her partner Kat since 2006 and has presented for Bad Girls, the Portland Leather Alliance, RCDC, Whipper Snappers, the CSPC, Leatherwoods and Desire. Annamarie also hosts Talking Kink and the Portland Queer Munch, and maintains the PDX Kink Events calendar. You can find out more at her websites: www.fierce-grace.com & www.PDXKinkEvents.com. 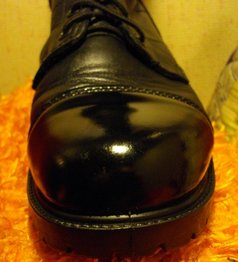 Alexander Wood has been in the pan, queer, and Leather scene for the last seven years. S/he is a practicing and active bootblack, a service boy to an amazing Daddy, and a dynamic bottom who enjoys a bit of mischief. Alexander has been a PDX bootblack and Bad Girl in Portland Leather/kink community for the last 3.5 years as well as the Bad Girl workshop coordinator for the last 2.5. S/he has taught basic leather care and Trigger Points for Lazy Tops.